We’ve been working with Horsham Time Well Spent to produce video content for a while now and in 2016, following on from an initial video in 2015, we developed a different approach to the video requirements by bringing a narrative element into them and the creation of a family.

Horsham Time Well Spent (HTWS) is a division of Horsham District Council and is responsible for the events programme which takes place in the town and surrounding areas across each year.

This programme covers things like the epic Piazza Italia event, now in its 11th year – food, fun and fast cars across three days in April – the Plum Jam event and many others.

Part of the remit of the team is to create content to promote the town events and one way of doing this is with video – which is great news for us.

In 2015, we shot a short promo featuring Louise Freeman as a shopper visiting Horsham and taking advantage of the Click and Collect services in stores across the Black Friday weekend.

The idea behind featuring an actress in this video was that it enabled us to tell a story and showcase various things in a natural but also interesting way, without solely relying on text or a voice over.

The video was successful and in late 2016, a plan was developed to create further videos in which Louise would return but this time she would be joined by a family to enable us to appeal to each of the different audiences that HTWS creates events for.

So her husband John McIntyre was joined by their teenage daughter Imogen Eden-Brown, their younger son Mattie Boys and, naturally, Gran played by Heather Skermer. 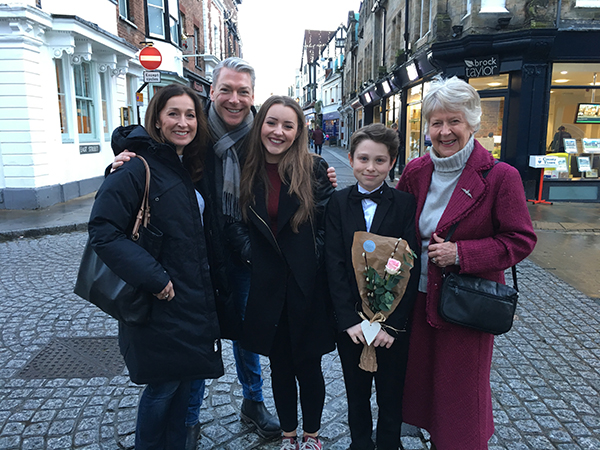 The first video the family featured in was to promote Christmas shopping in Horsham, late night shop openings and various other events. The family were introduced via a “Meet…” video which had shots of each member alongside their name.

Amassing 21,000+ Facebook views between them, a second, Valentines themed video was commissioned in which the family visited various places in town who would be involved in promotions for Valentines Day in 2017. We launched this with a teaser video about who was Mattie meeting for a date…it was revealed to be his Gran in the end!

These two videos had a further 19,000+ views and led into a promo featuring just the kids – Imogen and Mattie – as they took part in a Sporting Bears charity Dream Rides event. This is part of the Piazza Italia event in the town and you donate to the charity and get a ride in a supercar of your choice. Filming in a Ferrari California was certainly a fun day!

Following on from these, we took the family to the Piazza Italia event to create post-event promotional videos to showcase the family angle of it. The boys will feature in one video and the girls in another, with cross over elements in each when they join up for activities. The boys video got 9,000 views and the girls got 7,000 views to total 16,000 on Facebook.

Looking at almost 70,000 views on Facebook alone across all of these videos is a great response, one which we, and HTWS are very happy with. Within the videos, we have featured a large number of local businesses, all of whom have benefited via the featuring in these videos. We’ve had the family visit shops, restaurants and places including…

During the Piazza Italia shoot, the Symes family also featured on a live Facebook stream for the Visit Horsham page to select the winner of their Win an Alexa competition and this received almost 6000 views during its immediate life span.

It’s clear the videos are engaging with people on social media and doing their job to promote the events within the town. I believe the personality-based approach with characters everyone can relate to has given these promos a different angle to the typical style this content has to it.

It’s been really enjoyable to work on these videos so far, not least with the great group of actors appearing in them but with the team at Horsham Time Well Spent as well. Between us, we develop the ideas and content for each video and it has become a real team effort.

I’m looking forward to seeing what the Symes get up to next and hope their audience are too!

Thanks to Toby Phillips Photography for some of the pictures on this blog.

View The Symes videos below…