2014 saw the launch of the new range of Thomas Cook adverts for their hotels and holidays, which starred James Nesbitt and featured a specially commissioned song “An Amazing Kind of Wonderful” which is performed by Christopher D Mitchell and written by Michael Bruce. 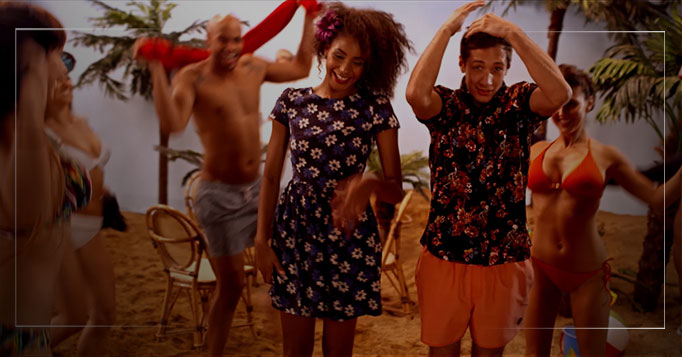 Thomas Cook came to us and asked us to pitch for the music video production for the song. We proposed an idea which saw the holiday hit the studio with a theatrical, lo-fi and off-beat feel to it. We wanted to do something different to the usual holiday themed videos.

We wanted to create something which was fun and lively with a bit of a sexy, summer edge to it and could cram the main elements of a holiday into the three minute run-time of the track and do it in an unusual and eye-catching way.

We think the result hits all of these goals!

We also wanted to create a strong visual style to the video and choose to shoot a sequence of steadicam shots which were linked by quick wipes across the screen, revealing the next scenario underneath.

The production featured 18 dancers from the former Rudeye agency including Billy Jaques from BBC1’s Tumble and Britain’s Got Talent.

This music video production was shot in 2K on the Sony F5.

Directed and Produced by Geoff Cockwill and Sacha Moore.

Behind the Scenes Camera – Chris Carr.