Guildford Shakespeare Company is a responsive, immersive theatre company producing plays in engaging and dynamic locations. We have been producing a wide range of theatre and stage videography content for them for almost 10 years. Find out more about our work together here… 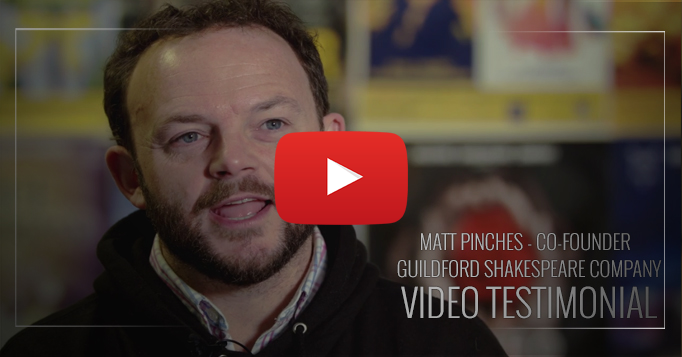 We’ve been working with the Guildford Shakespeare Company to produce theatre and stage videography content since 2013 when we connected via Twitter – just asking if they had ever used video in their marketing, to which the answer was no!

We met and developed a plan, one which has grown year on year both in terms of the output we produce but also the scale and creativity on each project.

GSC is led by Matt Pinches and Sarah Gobran and has been running since 2007. Each year, they stage multiple Shakespeare play adaptations and, in the last couple of years, have expanded this to include non-Shakespeare works.

Each production takes place in a different era and setting, enabling them to update the works or keep traditional as they see fit.

Cast interviews for shows including King Lear, Winters Tale, Othello and Macbeth. The cast spoke about their characters and the text. We edited short videos which promoted the shows and longer versions which have been used in the GSC educational workshops with children.

Trailers which promoted the shows, featuring specially shot content with actors in costume and in character for shows including Henry V plus…

Show filming – in recent years, we have covered the dress rehearsal of a show and filmed it with various shots and angles to then, in quick turnaround, edit a live show trailer which is used across the run of the production to further drive ticket sales.

Livestreams and full show filming – since the pandemic began, we have filmed shows in full with multiple cameras and edited them for “streaming” online to ticket buyers who then couldn’t make the show and we have fully livestreamed shows including the Youth production of The Purple Princess.

The inclusion of video into the GSC marketing plan has worked very well for them, as evidenced by the year on year growth of what we produce for them and the ambition within each piece of content.

“Geoff and the team at Silvertip are amazing. They are incredibly easy to work with and always ready to offer advice and support. All the trailers and films they have shot for Guildford Shakespeare Company have been of very high quality and they make the process really easy to understand and simple. Absolute stars!!!”