Motolegends is a Guildford based motorcycle protective wear retailer who also has a strong online shopping presence. They wanted to create a promotional video to show off their new shop and make a talking point with the video… 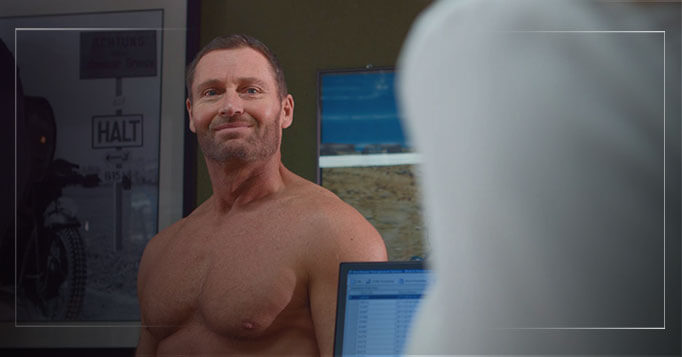 We started working with Motolegends initially via their Grand Prix Legends arm – this retailer sells F1 related merchandise like books, diecast models and so on. All the way back in 2009, we were producing a weekly vlog which featured the presenter Leigh looking at the latest diecast releases and models.

The vlog grew over the years to incorporate other staff members and it took on a life of its own, with a mini studio set, sketches, jokes and more whilst still keeping an eye on the diecast models at its core.

Motolegends started as the branch of the business selling the motorcycle protective wear and that too began life with a vlog with presenter Charles reviewing and showcasing the latest releases each week.

Once the shop was built for the company, they wanted a promotional video for it which is the one showcased here.

A male bike rider – Adrian Bouchet – rides into the shop completely naked, he meets the…flustered shop assistant, played by Louise Freeman, and goes around the shop picking out the items he wants. He gets suited from head to toe and leaves the shop a happy man before a woman in her underwear rides in – the shop, you see, caters to women riders as well.

The video was originally backed to the classic What A Man track, by Linda Lydell which helped make for a great video with a unique core idea to it. The licence for the track has now expired and this version presented here, after some preamble, is overlaid with another piece of music.