Show Racism the Red Card is a nationwide charity which works with high profile football players to tackle racism and, in the project we were involved in, anti homophobic, bi-phobic and transphobic bullying. This project took us all over the country during it’s production, find out more about it here… 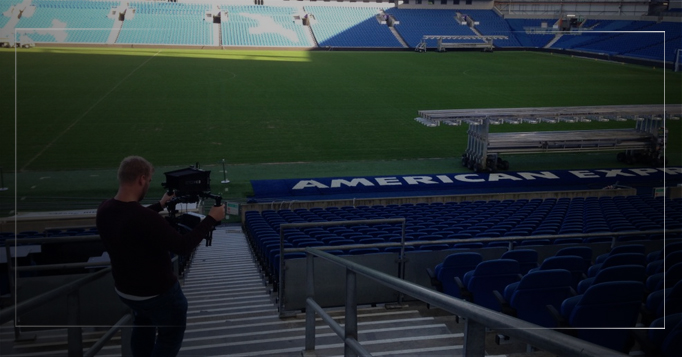 We won the Show Racism the Red Card charity video production project after putting in a pitch proposal for the shoot.

SRtRC were looking to create a promo to showcase the work they were doing with their new Anti Homophobic, Bi-Phobic and Transphobic bullying workshops.

We felt that no one should be bullied in this day and age and so this cause was one we could become involved with.

The campaign from SRtRC took place at 24 football stadiums around the country and featured teacher training workshops and children’s education sessions. All designed to impart information and ideas on how to better handle school or workplace HBT bullying and for children to understand peoples differences better and with less prejudice.

Like most SRtRC events, there are keynote speakers and workshop leaders as well as players from the team location the event is taking place at. This is a big draw of the days, particularly for the kids.

We were joining the sessions at 4 locations around the country – Arsenal Emirates Stadium, Brighton and Hove Albion Stadium, Millwall Stadium and Manchester City stadium.

We wanted to explain to the viewer what these classes were doing and why SRtRC was doing them, and we felt a presenter would be a good way to impart this information in the video. So we brought our regular presenter Jessica Jay on-board to the project and had her guide the audience through the work being done.

Spending a day with us at the Brighton stadium, we shot all her pieces to camera in one day – the script had been prepared and signed off in advance and gave us the structure to work with upfront.

At each location, we shot interviews with the SRtRC team, the speakers and workshop leaders as well as the teachers attending and the children too. we wanted to find out why these sessions where important, what people could learn from them, the hopes for running the courses in the future and more. We also wanted to find out what peoples understanding of the subject was before the course and after – it was clear that the attendees learnt from being there and opened their eyes to the situation.

Each stadium was the chance for us to get some great shots and show off these wonderful spaces as best we could. Now, I am not a football fan but there was something special about being in an empty place like this which most people don’t get to see like that, as it is usually filled with screaming fans! For Brighton, we took a Movi down with us which enabled us to get some awesome moving shots of our presenter but also of the stadium as well. This really brought an extra visual dimension to the video.

We shot the entire project on our Blackmagic Production Camera to give us a high quality image which could then be graded in post, the further enhance the look. Alongside this principal promo shoot, we also shot each seminar with our Sony PMW100 to give SRtRC archive copies of the talks.

When time came to edit, we had a lot of footage to work through. However, we had a strong structure to follow based on the script we wrote in advance of the shoot days themselves. Once all of the presenter pieces were in place, we could work our way through the various interviews and select sections to back up what the presenter was talking about.

Of course, we ended up with a lot of unused interviews so we compiled those into separate videos for the teachers, kids and speakers.

To further enhance the video, we added a number of motion graphic animation elements – a title card plus lower third name graphics and then motion tracked text additions to some presenter shots to deliver further information to the viewer. Creating the title involved animating the red card image of the SRtRC logo to reveal the brand name. This animation was also used to create the bespoke lower third name graphics which were all different lengths, depending on the speaker name.

Since completing the video, it has gone on to be used in various promotional campaigns by SRtRC to showcase their work in this area and to help secure funding for another round of educational classes like those run in 2015/16.

We really enjoyed being part of this project and shooting a promotional video which could be used to educate and inspire people and help the organisation get their message out further.

For a corporate video quote, please email us on [email protected] or Contact Us and we will then get back to you to discuss the project in more depth.