Here’s a couple of shots we recently filmed with presenter Jessica Jay, embellished with some 3D visual effects…

To make these effects shots more convincing, I utilized a couple of techniques regularly used in the visual effects industry. The first is called ‘3D camera tracking’ or ‘match moving’.

It allows the insertion of CGI in to live action footage with the correct position, scale, orientation and motion relative to the photographed objects in the shot. 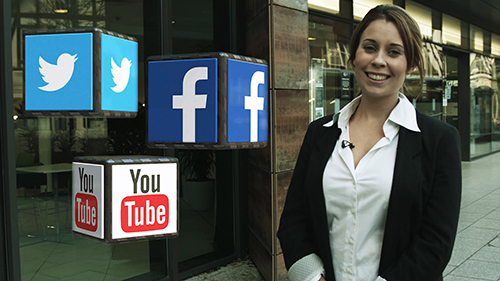 This is achieved by analysing every pixel on every frame and working out, through mathematical formulas, the creation of a ‘virtual camera’ which moves in an identical way to how your real camera moved. It can then be used to film your virtual CGI objects and have them sit neatly in the shot as if they were really there.

The second technique is about the lighting of the CGI objects. To make them seem like they are under the same lighting conditions as your photographed footage, you create what is called an ‘environment map’.

This is a 360° up and down all around view of the location that you have filmed in. It is similar to how we view Google Street view, in that you can look in any direction. Surrounding your 3-D object with this map means that the object will have the correct lighting and reflections to sit in the scene realistically.

In the map clip, you can see the sky reflected in the metallic surface of the map, with the dark patches either side from the buildings that are blocking the rest of the sky. You’ll also see we rotoscoped around Jessica’s skirt to place the map behind her, seamlessly blending it into the shot. 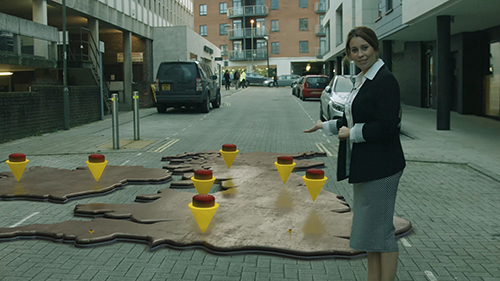 Similarly, in the clip with the floating cubes, you’ll notice that they occasionally catch reflections. If you look closely at these reflections you would discover they are of the shops on the other side of the road from where we were filming.

These techniques take a bit of planning, but the results can be outstanding.

Maybe your video could benefit from these effects, get in touch with us and we can discuss how our CGI department could add something to your production.