We’ve worked with Janet Devlin twice before – for the Shy and DRS “Beautiful to Me” collaboration and the “December Daze” video – and the “Outernet Song” was our third team up.

Working with Janet and her team at Insomnia Music is always a pleasure. They are creative and committed to the project and working as a team to create the end result.

Janet is a real talent – a lovely, charming, rich voice coupled with tender and relatable lyrics which touch on emotions we can all understand.

For the Outernet Song – a track about online bullying, self image and getting offline for a while – we wanted to make something very different to our previous video. However, Janet didn’t want a narrative to it and wanted something a little different and a lot of fun for it! 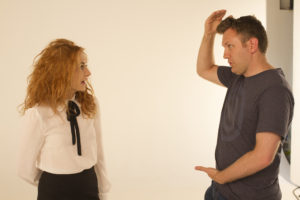 We developed an idea which involved Janet and multiple personalities of her, reflecting the lyrics in the track and giving her the chance to act up and perform in different personas.

So we had normal Janet, the paperdoll Janet (you can dress her up like a paperdoll but it doesn’t mean she will do what you want her to), the vacuous pop princess Janet (a completely different performer from who Janet really is), the self absorbed Instagram obsessed girl, the 80s throwback fitness not and the classic X-Factor look Janet, which is of course where she first came to most peoples attention.

We shot at the brilliant Blundell Street Studios in London and spent a day in their white infinity cove, putting the Janets through their paces and shooting more wonderful footage than we could possibly fit into the song run time. 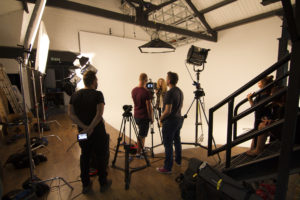 Shooting with my regular Director of Photography, Josh Bamber, the studio was filled with around 10,000w of lighting to create an even white look to the studio. Janet was beauty lit and the main focus of most shots of course. 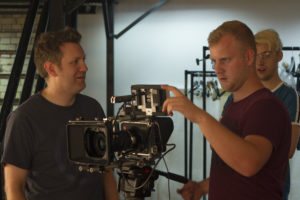 Except for the one which featured all 5 Janets at once! Using a wide shot and careful positioning, we returned to this shot in each look and set up the frame using the shot ghosting effect on the smallHD monitor attached to the Blackmagic Camera. This enabled us to position perfectly for the shot and put Janet in a place which wouldn’t affect her other placements. Each Janet then ran through the song, in character. Once these shots were composited together in the edit, it looked really cool seeing all her personas together.

We shot with our Blackmagic Production camera and graded the video in Davinci Resolve, after editing in Premiere. We added a few little visual effects via After Effects like a tooth shine and distortion on some shots. 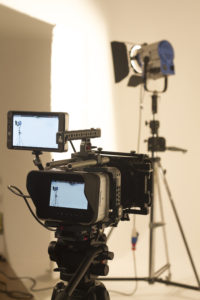 Upon launch, the video premiered on the Digital Spy website and was front page on Vevo. It has been submitted for TV broadcast and will hopefully follow in the success of “December Daze” on broadcast.

Alongside the main shoot, we also produced a behind the scenes video which was presented by our regular vlog presenter Jess Jay – look out for this soon!