Is vlog production or self-filmed video content part of your social media output? Hard to believe we have produced a vlog for nearly a decade now. Let’s take a post was originally written in 2013 when we had just started our video production vlog. We thought it was due an update, so here it is…

Back in 2013, everyone knew about blog pages – you likely even have had one for your business – but back then, VLOG (and vlog production) was a word that you might have started to hear more frequently.

Today, we use the word vlog less and just call them straight up “videos”, but we still think vlog as a word covers this content. And this content can be professionally produced like ours or self-shot by you.

A VLOG is a combination of video and blog and, naturally, VLOGGING is the term to describe actually making a vlog. A vlog can be a monthly, weekly or even daily video clip in which you talk, to camera, about whatever is on your mind. The same way you would in a blog…but visually!

See why we think what we just refer to as a video is a vlog?

This is one of our recent vlog production pieces, presented by Emily Beach. We started our vlog back in 2013 after talking with various people we knew and realising that being based in the visual medium of video production, we should use the format to condense our news roundup into a shorter, visually appealing piece rather than lots of text.

When offered the chance of a chunk of text or a short video covering the same ground – which would you choose? We know which one we would choose. Today, this is even more relevant with the power of video in search engine ranking and it’s presence on social media platforms.

Since we started our vlog production – in which we show clips of our recent work and talk about our upcoming work – we have seen a good number of views on YouTube, increasing with each episode and on Facebook, a great number of views. The feedback has been good and we have booked work directly off the back of the vlog and work for our presenter.

For us, the goal with the vlog was get our name out there, spread the news about our work and potentially win work off the back of it. We have achieved all of those goals to date.

We wanted the vlog to be of a high production value to reflect our quality of work and so rather than just do mobile-shot videos, we kept to a bi-monthly schedule for the vlog but in recent years have increased our on-location mobile-shot content as it’s quick to do and get out.

One thing we have noticed is that the vlog on Facebook reaches a wide audience (5-6K views) but this audience has a shorter retention rate whereas YouTube has a smaller view count but a longer retention rate. This leads us to believe that viewers on Facebook are presented content they potentially like and they then choose to watch or not and on YouTube, people are actively searching the content to watch, based on their interests.

We are aware that people don’t watch our vlogs for entertainment the way they might one about films or music but they watch to see what work we have done recently and what we have on. They want to see if we are busy and to get a quickly digestible, visual version of our news. 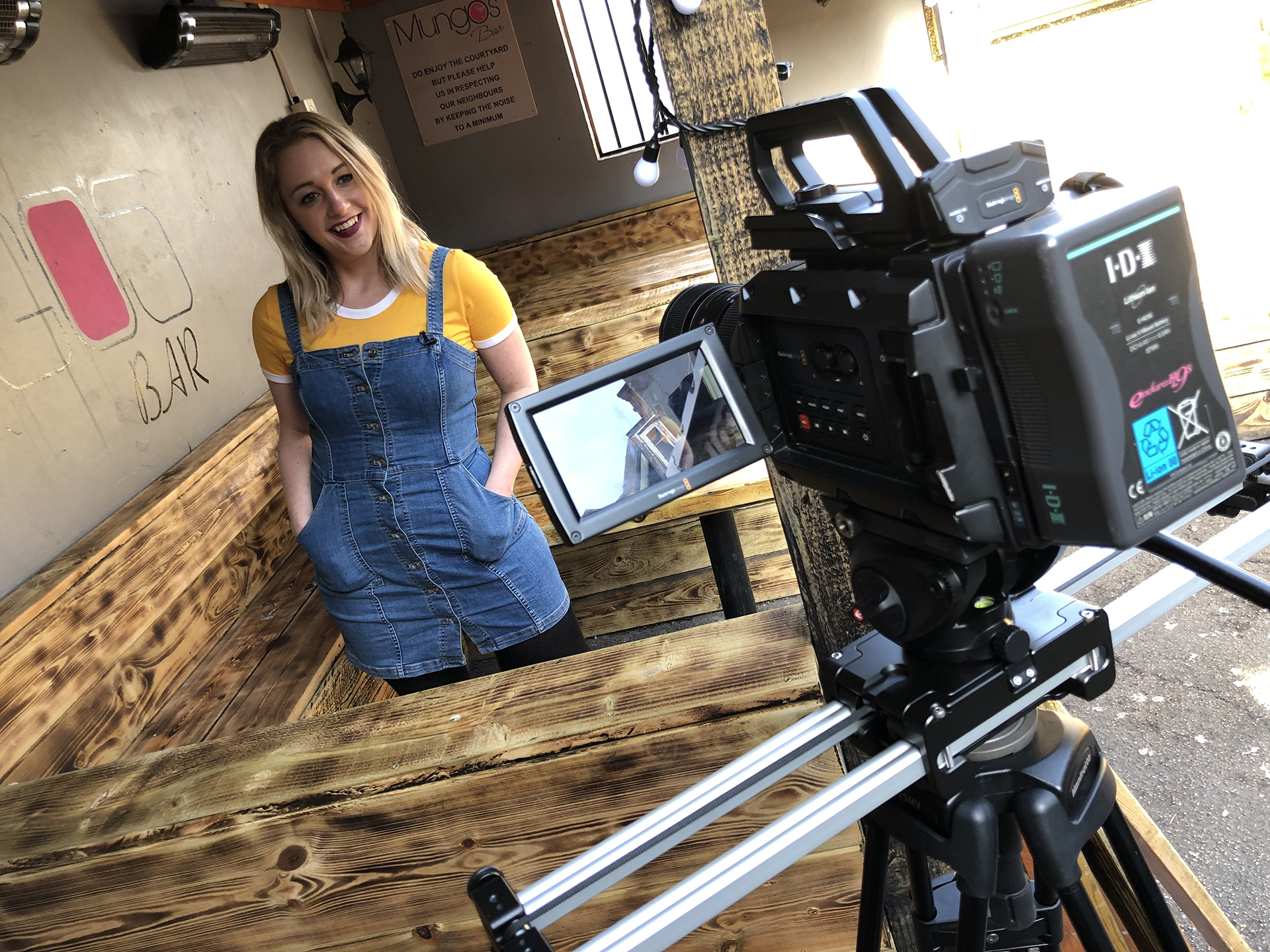 Shooting a vlog with Emily Beach in Horsham

What can a vlog offer you though?

If you run a business, you can post videos when you like and in them, you can talk about new products, new events, and new offers – whatever the core content of your business. If it can be verbalised and shown visually, a vlog would be a great benefit.

Chances are, you produce your own vlog regularly for your social media channels!

We shot a weekly vlog for Grand Prix Legends for many years, and they saw a massive increase in their ROI with it. Now, it forms a central and essential part of their marketing content. We also filmed a weekly vlog for the now defunct Horsham based newspaper The District Post as well which helped increase awareness of the paper and it’s editor and increase it’s digital profile.

So will a vlog generate money for you? Maybe if you hit the YouTube requirements but is that directly what it is being made for? It certainly worked for Grand Prix Legends to showcase their new arrivals and get the inbuilt audience excited for new products and to drive sales – the main goal rather than earning via YouTube views.

For the District Post, it has raised their online profile and spread their name further. Deciding whether increasing sales is important to you or making money directly off the vlog is a question to answer before you begin production.

We firmly believe any video content is better than none and self-filming to a decent standard will not hurt your business. There’s a time for this of course and we think reaching out to an existing audience who knows you is when it works but when reaching a new audience, shooting professionally is the key.

We have helped give self-filmed material a polish for people – adding titles, music, edit transitions etc – to raise the quality of the finished video. Below is a vlog that our presenter Emily filmed during lockdown in 2021 when we couldn’t get together and then we edited it all together.

Since we started vlogging, Facebook Live, YouTube Live as well as Instagram and LinkedIn live have come along, all of which involve live streaming of video.

We have utilised Facebook Live a lot in our work both spur-of-the-moment whilst on shoots and in pre-planned sessions which go out at specific times.

There is a decision to make whether a weekly or even daily Live stream shot on mobile or a regular more polished vlog would work well for your business or would both work? We approach the vlog as the showcase to potential new clients and the Facebook Live sessions reach out to an audience we already have. The difference in the production on each is tailored to the audience we want to appeal to.

Facebook and Instagram Live seems to work well if you do the sessions regularly and keep them at a reasonable length – people don’t necessarily tune in immediately so short sessions don’t work too well in the algorithm to be picked up and put into feeds.

Could something similar work for your business?

Why not try a vlog production for getting your information out to your audience?

A regular vlog about what’s going on, new products, events you are at, guest interviews, news and so on would appeal to your audience.

Post the video on YouTube, embed it on your website and blog, directly upload it on Facebook, LinkedIn etc – get it out there. If you can tag anyone involved in it, do it as it increases awareness. The more people you can get to see it, the better.

We can, of course, help shoot these vlogs – we run our own so know how to do them and do them well – but if you have a decent camera or even your iPhone with a plug in microphone then shoot it yourself and upload it.

Consider a Live stream as well, not necessarily instead of a vlog but as an accompaniment to one.!

Have a think and give it a go…if you want to talk more on vlogs, get in touch with us!

This vlog production blog was originally written in 2013 when we started our vlog. It has since been rewritten a number of times as our vlog has changed and developed over the years.