Getting good sound on video…it’s important isn’t it?

When shooting an interview or a piece to camera, or even a short film / acting scene, having good, clean sound is vital.

There’s a couple of ways to do this – wireless radio mics, a boom mic operator or a general room mic.

Our favoured option is to use wireless radio mics – a straightforward, simple option which is more than effective. A small lapel mic clips onto the upper chest or collar of the speaker, or even goes under the shirt to hide it. Picking up predominantly vocals, around 90% of the recorded audio is voice with the remaining 10% being background noise, dimmed down.

A wireless transmitter pack sits on the speaker and the wireless receiver is plugged in, usually via XLR, into the camera or a separate audio recorder. 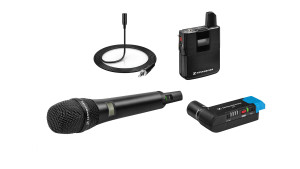 We use the new Sennheiser AVX model – small, compact and with the ability to hop between available radio signals to ensure constant, clean sound, these little mics are superb. With minimal connections and flexible, movable parts, the chance of breakage and damage to them is greatly reduced. Also, they’re simple to set up – you just turn the two units on and pair them together. They automatically link in and start working together.

We use them directly into cameras with XLR sockets or into a portable audio recorder like our Zoom H5 or direct into a non-XLR camera with a jack adaptor lead. 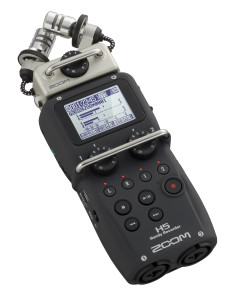 Old-style wireless radio mics are now illegal as the radio frequencies changed a few years ago. These new mics work with the frequency change and are legal.

It’s important to listen out for external sounds when coming to record audio – an airvent or fan in a room, someone mowing the lawn outside etc. All of these things should be listened out for – we often find they fade into the background of the vocal recording and aren’t an issue. Sometimes, semi-natural sound is good but if the noise is repetitive or annoying, try and get it stopped!

Listen out for echo in a room as well – you don’t want the voice coming back on the audio because once it’s there, it’s there. You cannot remove it! Rooms with paddings in like sofas, curtains etc, will help reduce audio bounce so try to avoid big empty spaces.

Another option for sound recording, if you need a little more control or need to record more people at once, is to have a boom mic operator/production sound mixer – or to have the two roles separate, depending on your budget. You’ll have seen these guys on footage and photos from movie behind the scenes shoots – they stand with a microphone on a long pole, which they hold overhead of the speaker. Without getting it into shot! Hopefully! The boom operator job is a tricky and precise one – they need to not only be listening to the audio but be aware of shadows and camera positions so as not to appear accidentally in shot. With the mic feed going into a small, portable mixer, they are able to make various adjustments to the sound being recorded, to get the best quality sound from location. They can have multiple inputs into their recorder and adjust the volume

The least preferred option for audio recording is to use a mic in the room / at location and it records the general sound – vocals and ambience together. It will focus on the loudest, closest thing to it, but will not pick up the audio in the same way that a lapel mic or a boom operator would. This is a last resort to record sound – only use if no other options are available or remaining!

If you’re shooting outside on a windy day, you stand a good chance of having wind interference on the mic. This creates near unusable audio so the solution is a good old dead rat / cat on the mic! This is just an expression of course, the actual item is a fuzzy fabric covered slip which goes over the mic itself and massively reduces the interference. 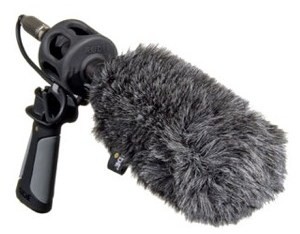 Of course, the option used to record the audio will depend on the shoot requirements. Some locations might benefit from the use of a boom operator whereas some shots will require a wireless mic, hidden on the speaker as a boom op can’t fit into shot. A lot of interviews can be done with just a radio mic on the speaker but a boom op could be useful in a location with a lot of ambient noise.

If possible, always use external mics to record audio. The inbuilt ones in cameras are often not that great. Our Blackmagic camera for example, as much as we love it, produces useless sound. The camera picks up too much fan noise from inside the camera and so the audio is only useful as a guide track. Sony cameras have good mics for live events when, say, music needs to be the loudest thing on the soundtrack, but they can just as easily pick up the sound of someone chatting nearby and focus on that.

If you come and shoot with us and we need to record audio, we’ll discuss with you the best option to get the best audio for your video.