We couldn’t have an in-person audience for our 2021 event (although we did for 2020) so we decided to still put on an event but livestream it for people to watch at home.

Our amazing host Nicola Hume led the event and was joined at points throughout the night by judges Geoff Cockwill and Nick Mowat as well as our vlog presenter Emily Beach. We showed a clip of each shortlisted film and played the winning film in each category in full. The night ended with a performance from local singer/songwriter Tim Newman. 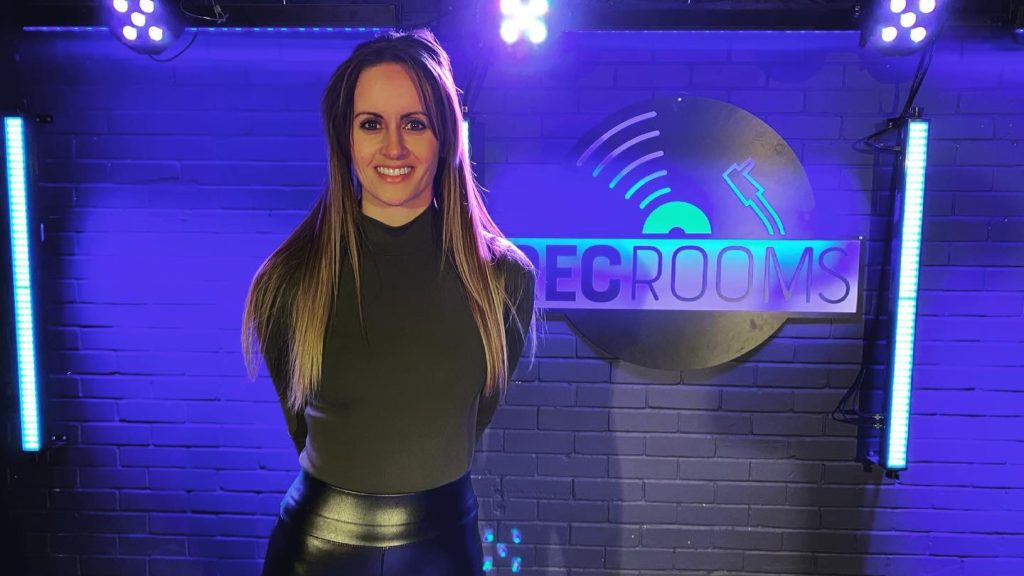 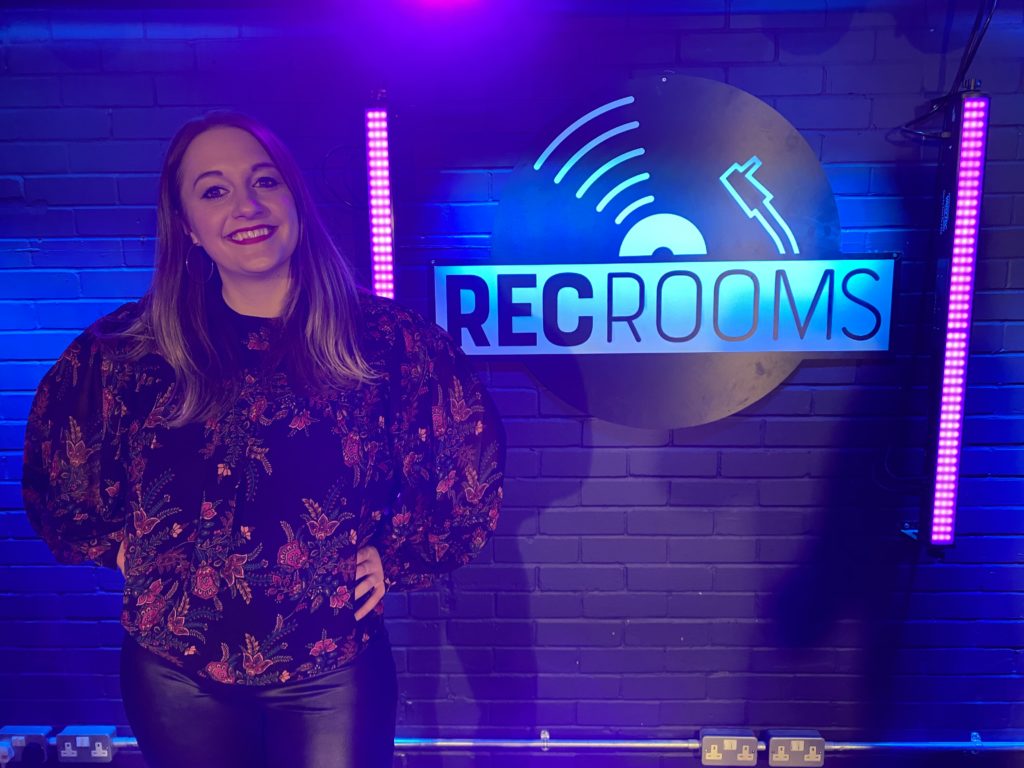 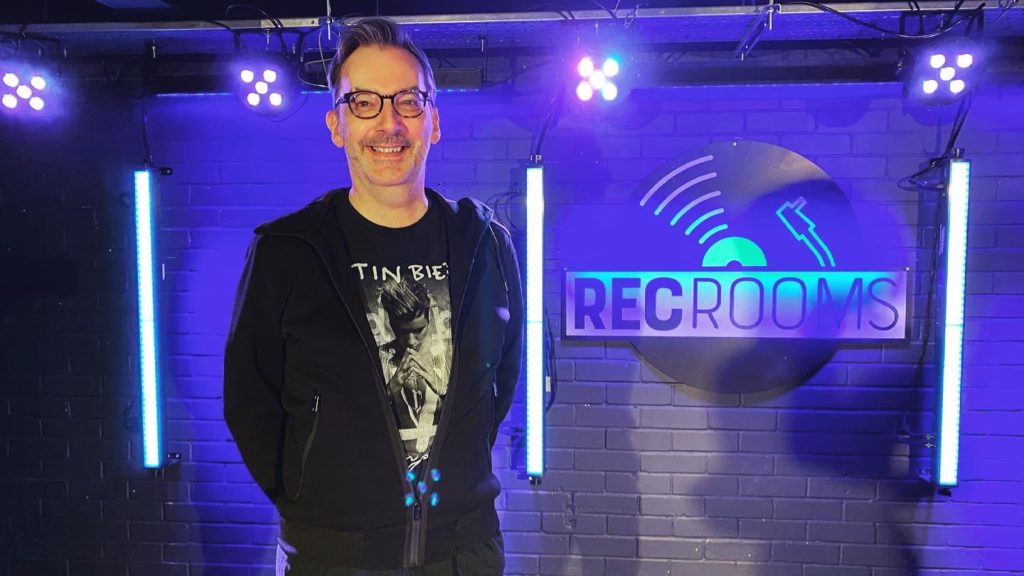 We wanted to take the production of this livestream up a level from the ones we have done previously. We had a large space at our venue – which was The Rec Room in Horsham – and so we wanted to make use of it.

We had the main part of the show run on the main stage, naturally, and this is where Nicola was for the duration and was joined by guests at different times. In the room next door, we set up a corner area with a sofa to be used for interview sections which were run by Emily Beach. In the opposite corner of that room, we set up for the performance from Tim Newman which closed the show.

Each area was lit either by venue lighting (on the main stage) or our lighting. 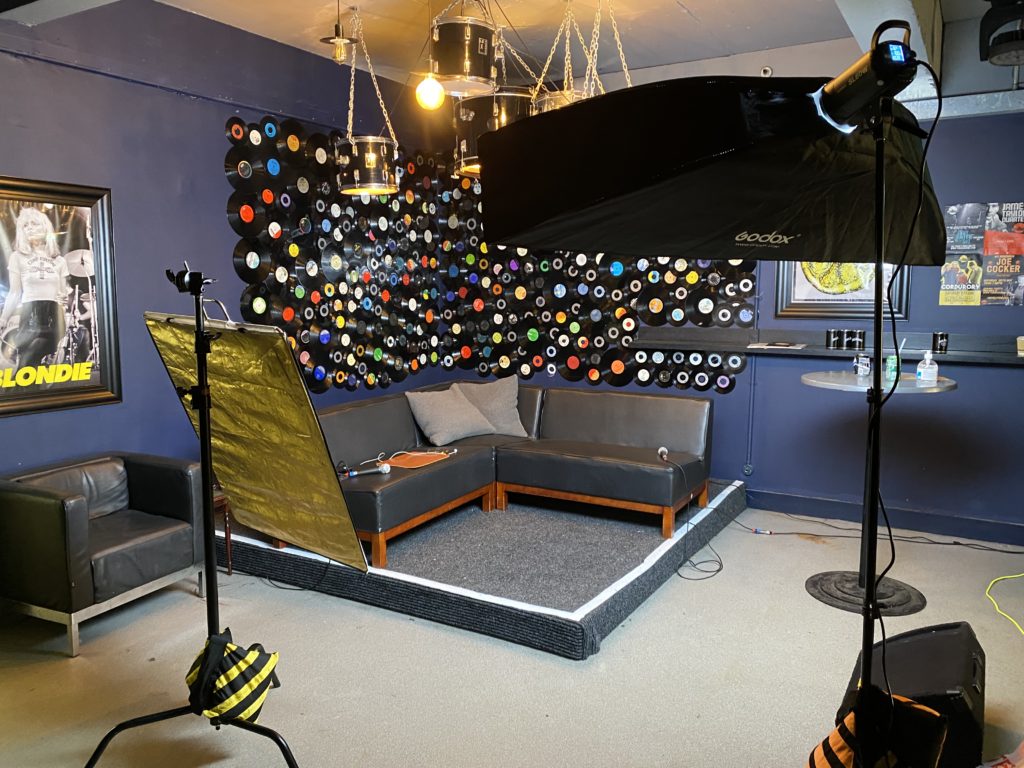 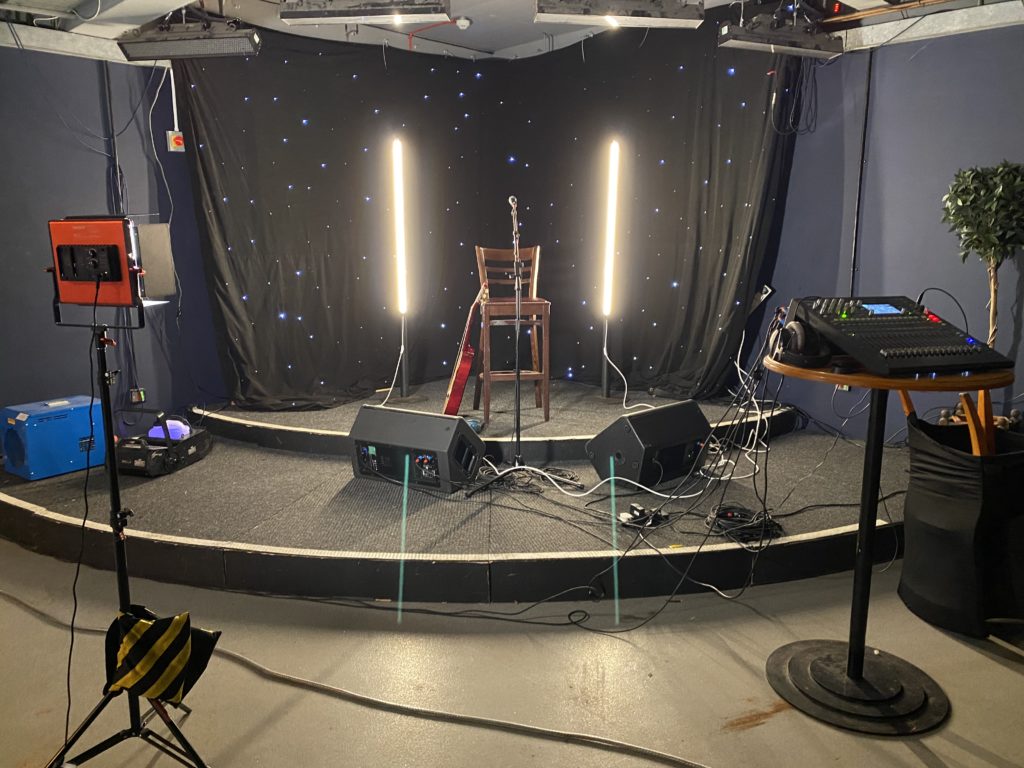 Left above – the interview area used by Emily. Right above – the performance area for Tim Newman lit with tube lighting, a star curtain and LED panels.

We covered the whole show with 3 cameras – an unoperated wide angle and two operated cameras. When we needed to get out to one of the spaces in the room next door, a camera would move during the streaming of one of the winning films and go into a pre-designated position and set up ready to go live when the film finished. We would then cut back to the cameras in the main room for the next section in there. At the end of the night, two cameras moved into the room next door and set up for the Tim Newman performance whilst the unoperated angle was used to wrap up the awards section of the night. We then cut to Tim and brought the third camera into the room to give him 3 angles during his performance. 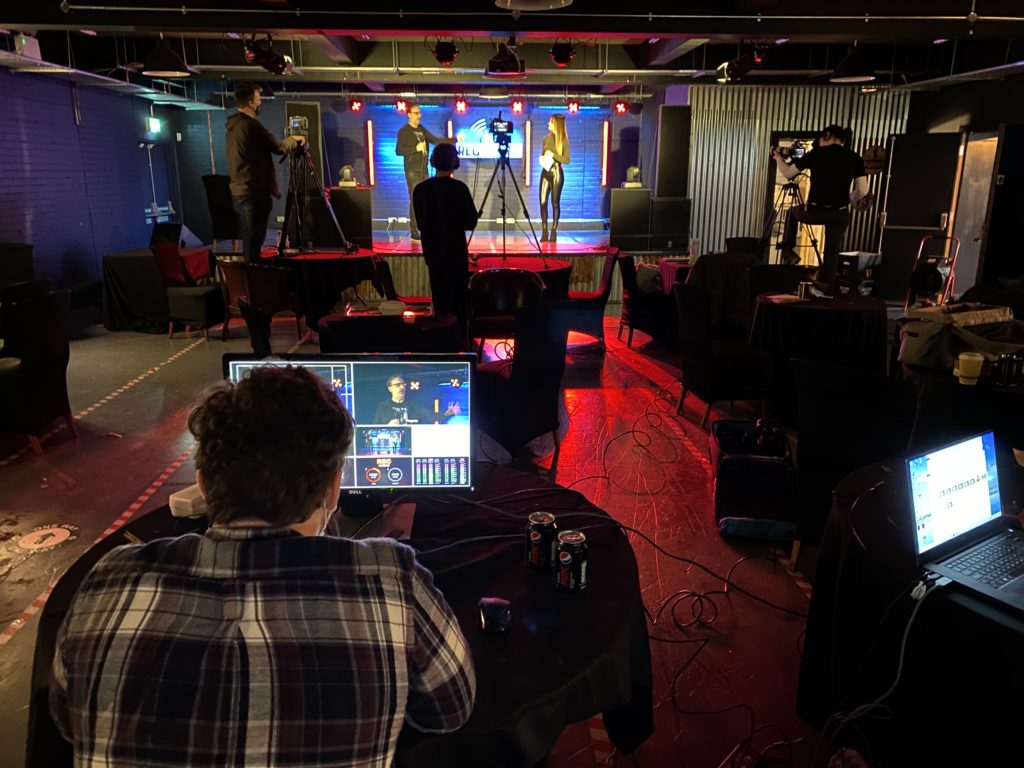 Mike live editing with the 3 cameras in front of the stage.

The show was edited live using the Blackmagic Atem Mini Pro which had the 3 cameras going into it. The fourth input was a laptop which was running a fullscreen version of VLC Media Player, using a playlist we built in advance which comprised the short films themselves plus videos we put together of the shortlist clips etc. 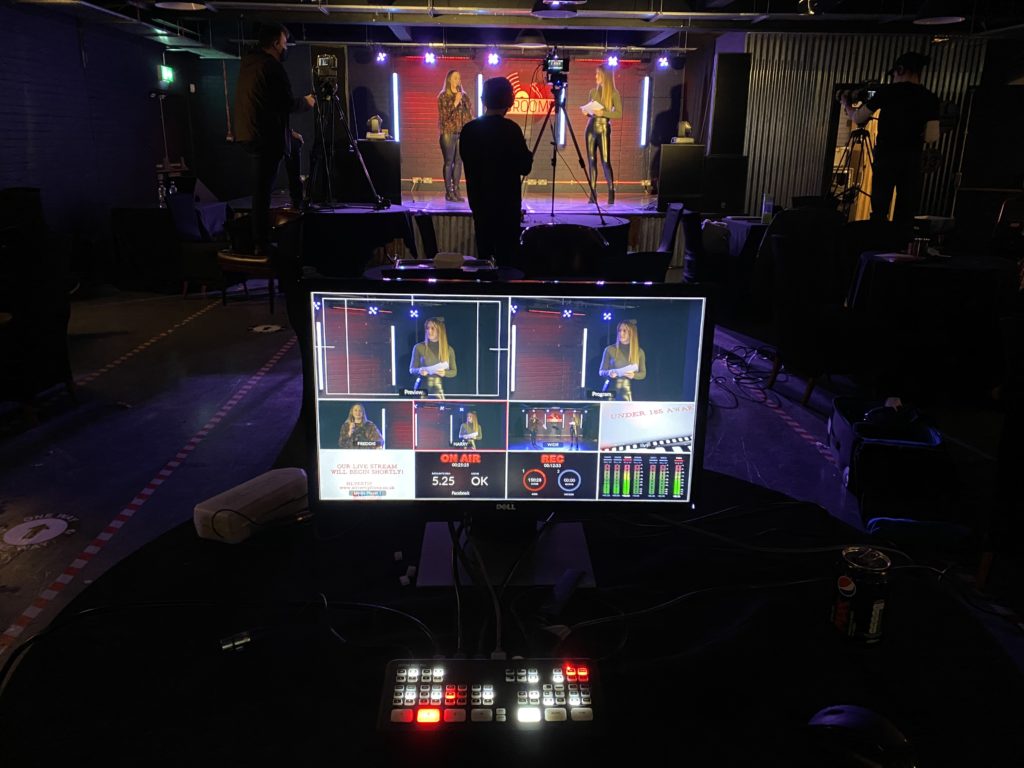 Audio on the night was run through the venue soundesk, which was set up and monitored by their technician. Nicola had a lapel mic which ran into the mix desk and then the interview area had 2 microphones cabled into the mix desk, there was a guest mic on stage which ran into the mixdesk and then the music performance was mic’d up and sent into the desk. Using software on an iPad, the technician could activate or mute mics as required and sent that single feed into a camera. On the Atem control desk, we simply needed to activate either the VT playback (from the laptop) or the camera audio feed (for the microphones) which was easy to manage. 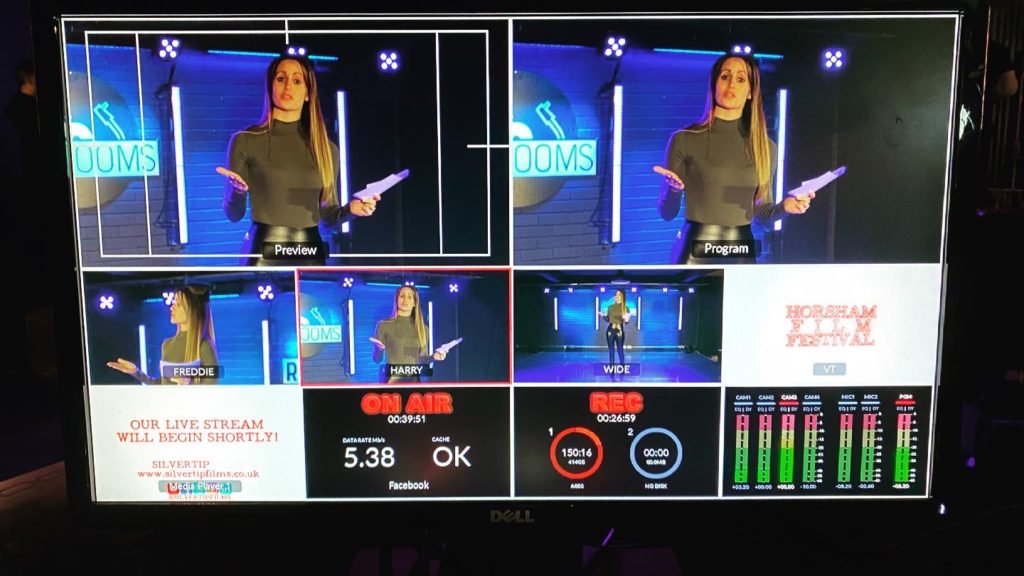 The live edit screen on the ATEM Mini Pro

The night ran smoothly online with no issues. We were joined by 60-80 viewers consistently through the night with a lot of engagement and comments. The stream continued to pick up viewers post event as well.

Take a look at the stream below…

If you would like to visit the FilmFreeway page for the Horsham Film Festival, follow the link.

If you would like to talk about the Horsham Film Festival or discuss livestreaming with us, get in touch and let’s talk!