This is a guest blog post from Claire Hampton Opera Singer – one quarter of Operafource!

Operafource is a new and dynamic group of 4 female professional Opera singers, taking hold of the complexity of the classical repertoire with ‘Fource’ and fusing it with the power and passion of rock.

The group was set up by myself, Claire Hampton and Fiona Harrison. Our vision was to produce a new wave of sound that would resonate throughout every generation of listener. 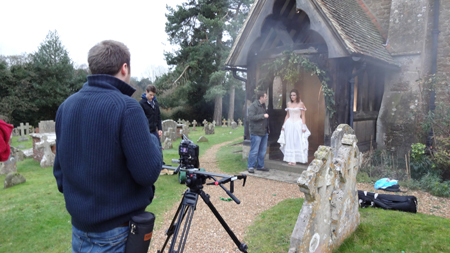 As trained Opera singers, it was important that we found a new sound that would compliment our style of singing without compromising our performance. After talks with various musicians, it became clear that Rock was going to be the driving force in producing the exciting sound that became Operafource!

After several months of research we had chosen our music and were ready to walk into the recording studio to realise the potential of our ideas! We recorded 6 tracks and on completion of these tracks, it was then time to turn our attention towards our image!

With our theatrical training, it was important to add another dimension to our performance and so we came up with the idea to represent our vocal force with that of natures! An idea was born… 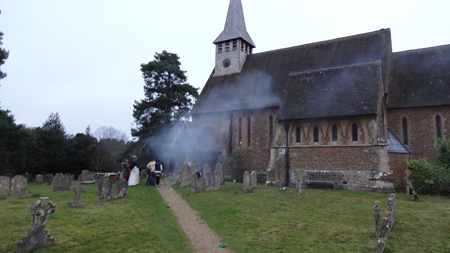 Each of the girls represents one of the four forces of nature, Earth, Air, Fire and Water.

This gave each girl a focus, and allowed them the flexibility to exercise their own individual flair within the group…

Alexandria Wynn represents ‘Water’ and shimmers through her performance as ‘Ice’

The girls identities are expressed not only through their performance but their cosmetic design.
Their costumes, hair and make up gel together to enhance their overall impact! The girls are corseted to emphasise the classical influence in our music and the powerful use of Rock is highlighted in their hair and make-up creations.

We approached Silvertip Films about shooting our first video. This collaboration brought about the video for ‘And he shall Purify’ from Handel’s ‘Messiah’. 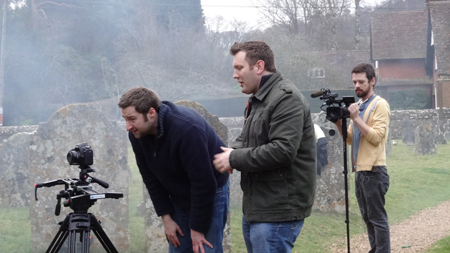 Director Geoff Cockwill’s vision and skill ignited our unique concept and brought the element of surprise to tantalise and tease our audience! To start this process, it was important for Geoff to hear our music and enter the world of Operafource.

We then discussed the image of the group including costume and the use of the elements to add character and focus to the girls and their individual image. We discussed what venue would best suit our music and image….a graveyard was top of the list. This venue would highlight not only the idea of purification replicated in our music/ image but would also allow for the grungy Rock influence to flourish and add the edge we needed in our performance.

One of the problems we encountered was the weather. We were shooting outside in very cold conditions and our original date had to be cancelled due to rain. Fortunately our next scheduled shoot went ahead although hot water bottles and cups of tea were in great demand!

Each girl representing her element was discussed and Geoff came up with ideas on how to bring them to life. 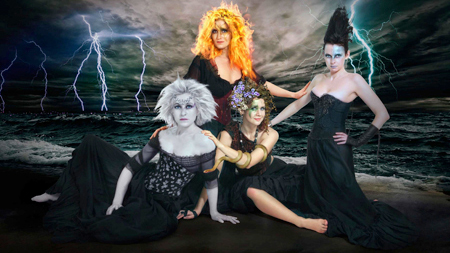 Storm, for example, was whipped up using smoke, and wind effects…it was breathtaking to shoot amidst these special effects. Ice was generated by the use of snow, and wind machines. Phoenix grew through her performance with the use of Flame throwers. Terra got down and dirty with the use of wind machines throwing out leaves and green foliage. The lighting on set was incredibly atmospheric both in the daylight and at night.

On the day of the shoot, it was important for each girl to focus on her performance and so Silvertip sent out a production schedule in advance of the shoot to ensure smooth running of the days events, the crew had to shoot each girl twice and then the group shots twice, each session lasting around half an hour. This was a lot of filming!

We were also lucky on this occasion to have a great team supporting us and Louise Gookey who presented a ‘behind the scenes’ documentary on Operafource! Louise brought her professionalism and enthusiasm to the set along with her humour and attention to detail. I know this was an extra boost to the girls and encouraged us to fight through the freezing conditions that nibbled at our toes.

Geoff was a fantastic director who encouraged us and focused our eye towards the camera whilst allowing us freedom to express ourselves within the atmospheric special effects around us.

Our music was played through a PA system whilst filming which helped us to get into the spirit of our performance. It also brought in a few passersby eager to get a glimpse of Operafource in action!

We shot some scenes in daylight and some in darkness to add contrast. We had two costume changes to show a transformation from black to white encapsulating the main theme of our music, ‘Purification’. Supported by DOP Chris Carr, Geoff’s filming has brought out the fugal structure of our music. It allows for each girl to revell in her own journey whilst uniting harmoniously with the full force that is Operafource.

We had our music, we had our image, our video and we now needed to create a live theatrical show that would engage our audience…we decided to dive into our next challenge of choreographing Operafource and delivering it to the stage!

This complete, we now have a show!

Operafource is ready to blow you away!….

We have the girls, the sound, the costumes, the designs,…..so bring on the lights, the camera and the action!!

Posted in Music Video, Video Production Tips, Behind the Scenes and tagged operafource.